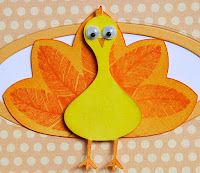 and the theme this time is Gobble gobble - we need to see a turkey!!!

I have to confess that I have never had call for a card with a turkey on it before, so as I had no appropriate supplies, I turned to my trusty Silhouette Cameo and found a cute turkey image there. This card was the result! 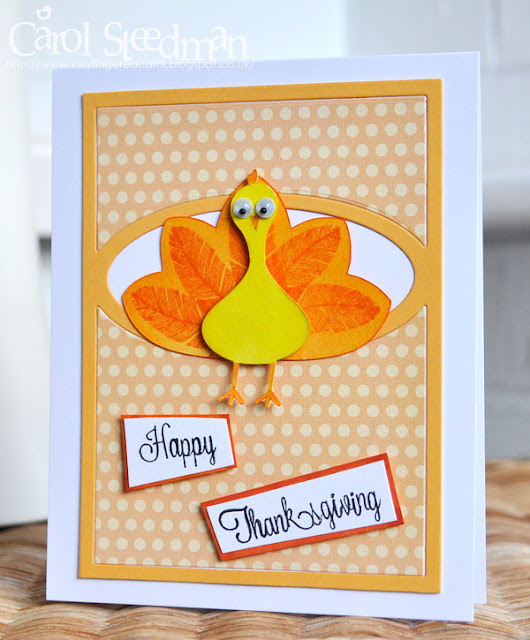 I began by cutting the Papertrey Ink You've Been Framed: Oval die from orange card and then again from some patterned paper, and attached it to a white base card.

Then I cut my turkey in white card and coloured it with Distress Inks. I took a stamp from PTI Happy Trails and gave Drumstick (well he had to have a name don't you think?) some fancy feathers because he wanted to look handsome in time for Thanksgiving. I coloured his beak, legs and comb (had to look that one up!)with a Copic marker, and then added some googly eyes, before mounting him onto the card. 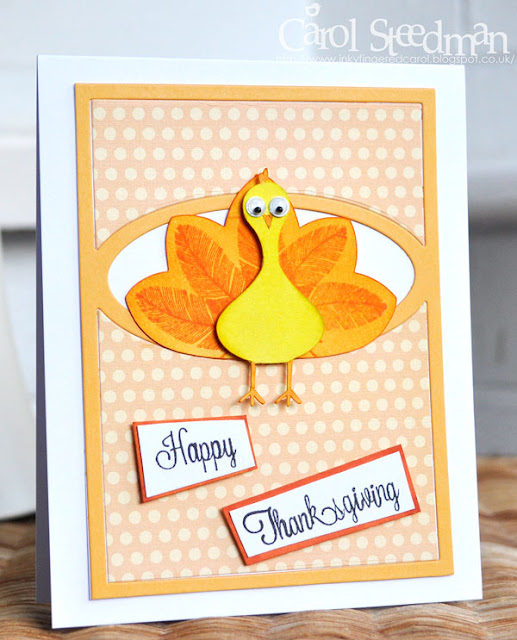 To finish off, I used the Avery Elle Lovely Letters stamps to spell out Happy Thanksgiving. I'm ashamed to say I've had these stamps for at least three years but I'd forgotten I had them. They are so easy to join up as long as you stamp one letter at a time, and I'm going to put them with my more loved stamps so I don't overlook them again.

I do hope you will pop over to the SCT blog for some more inspiration and join in with us this time. We'll be be back in January when we will be changing to a monthly challenge.

Shopping Our Stash challenge - gobble 'til you wobble

Retro Rubber Challenge - I took yellow, orange and brown from the photo.

Posted by Inkyfingers at 00:30 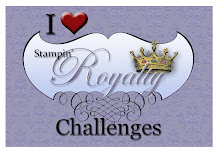